Make your own Leather Beaded Wrap Bracelet with these easy DIY step-by-step instructions.  A fun kids activity or gift for friends. 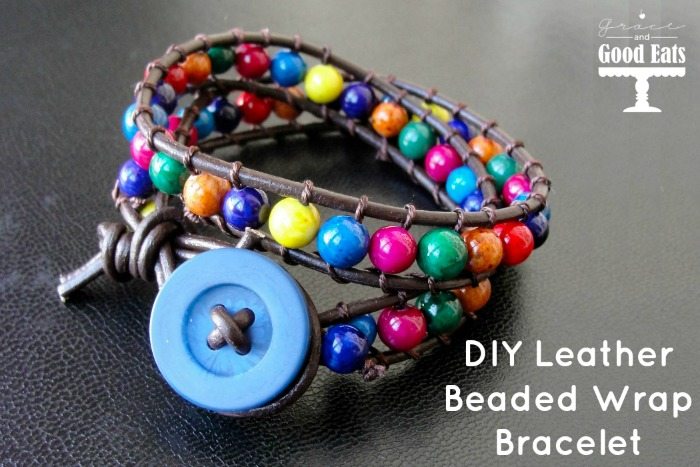 Congrats Emily! I hope you’re enjoying your honeymoon, I’m glad I could fill in and share an idea for a DIY bridesmaid gift! I blog at Love Endures All Things and I’ve been wanting to try these leather beaded wrap bracelets for a while now. Have you seen them around recently?

I may have pinned one or two . But obviously I wasn’t going to pay $30 for something that seemed so easy to make.  So I set out to make my own.  Michael’s had a tutorial online for one and I looked at it basically to get a supply list then I figured the rest out as I went along.

I threaded the button onto the leather cord first to get it out of the way. How you attach it will depend on how many holes your button has. Mine had four so I attached it with a criss-cross stitch to make an X.

Next, you’re going to make a knot. I tied the end piece to the long piece on each side, then tied both long pieces together. I found that it was helpful to have something holding the leather pieces in place, so you have one less thing to mess with. I used this for a while, but I think it would be even easier if you could secure both ends somehow.

The next (million) steps are where it gets a little dicey. Cut off a pretty good length of thread (20 inches or so, you want to be able to get lots of beads on with it but you don’t want it to be so long that it’s constantly in the way). Tie a knot in the end of the thread and put your first bead on.

I’m going to try to illustrate the threading process because taking picture while I was doing it was way harder than I could handle didn’t show the steps very well.  (That little red blob at the beginning is the knot by the way):

Now what’s a girl to do when she runs out of thread? Good question. Tie your thread off. I made a knot around one of the leader cords. Then cut some new thread to work with. I made a couple knots around the thread of the previous bead to attach it. You could attach it straight to the cord probably but I didn’t want it sliding down.

Now this whole thing might seem a little overwhelming. And at first it is. But around the time you think you won’t finish until next Christmas you’ll start to get the hang of it and find a way to thread the beads that’s slightly more efficient than the sloppy way you started. Or maybe that’s just me (mine did not start off well).

Once you get to the length you want (or close to it…my loop adds an inch to the overall length) you’ll need to make a loop to go over the button. I’m going to send you to another site for tips on knots because I can’t remember exactly what I did and I’m pretty sure it’s not even a real knot they already have nice illustrations and even animations of knots. I would suggest the figure eight or maybe the yosemite bowline.

So there you go, your own DIY Leather Beaded Wrap Bracelet. Perfect for gifts or yourself!  I think I spent less than $10 and I had plenty of cord and thread left for at least one more bracelet. Much nicer than $30 bucks plus shipping, right?

Thanks so much, Susan, for sharing this awesome DIY Leather Beaded Wrap Bracelet tutorial!