This Skillet Spaghetti recipe comes together in a single skillet and is finished under the broiler to brown the cheese. Delicious!

It’s no secret that I love pasta. If I had to choose between pasta and cupcakes… actually, I don’t even want to think about that. It’s my comfort food of choice, and my go-to when I run out of ideas for dinner. We eat some form of pasta at least twice a week, but rarely have traditional spaghetti and meatballs.

Sign up for my free pasta e-book here and I’ll send you the recipes for all my favorite pasta dishes!

This is my favorite way to make spaghetti — I mean, who wants to dirty more dishes than you have to? And I don’t know what my problem is but I can NEVER have the noodles and marinara sauce ready at the same time. I always start them together and forget to factor in time for the water to boil. This baked spaghetti casserole recipe solves all my problems.

This is such an easy baked spaghetti recipe, and it requires ingredients you likely have on hand already. Win!

How to Make Baked Spaghetti in a Skillet

What Size Skillet Should I Use?

For this skillet spaghetti recipe, I used a cast iron skillet that’s 11 ¾ inches in diameter. A smaller skillet may work if it’s very deep.

Can I Use Another Type of Pasta?

Possibly, but a different pasta shape may alter the cook time. Thin spaghetti cooks quickly and doesn’t need as much water, which is why I use it in this cheesy baked spaghetti!

Tips for the Best Baked Spaghetti 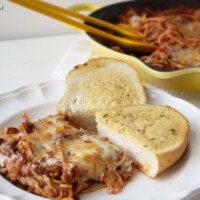 I have a relationship with Le Creuset which includes receiving products for review.

When this recipe says large skillet, it should say giant, 14" skillet. This will make a monstrous mess in a normal cast iron skillet and won't cook.

Sorry to hear that you had issues, Patrick. The skillet featured in the photos that I used for this recipe is 11 3/4 diameter.

Hi, I have a cast iron skillet that is 10 inches or so in circumference and I am wondering if that is big enough for this recipe or do I need to cut the amount of ingredients in half?

Hi Derrick, I would recommend a larger skillet. The one in the photos above is 11 3/4. The 10in might be ok if it is really deep. Hope this helps.

Hello! I love this recipe. I was wondering if I can include the recipe. Along with the photo that says "One skillet baked spaghetti" in a recipe roundup on my site?

Hi Patti, thanks for asking. You may use one photo with a link back to my site for the recipe.

I absolutely LOVE Spaghetti! You bake it, just cook it or even leftover the next day! My other half is the exact opposite it is quite funny too! I want help meal planning so I tell him if he doesn't help me with it I tell him we will have spaghetti again! so bad but so good! I also wish to invite you to my link party called Tips & Tricks Link Party! It opens every Monday at 9pm Eastern and goes until Thursday at Midnight Est. I hope to see you there!

Thanks for sharing the recipe! Pinned it! It looks easy and delicious!