These Cinnamon Sugar Cookies were created by a happy accident and my family loves them! So easy to make and perfect for cookie swaps.

Now, I know what you’re thinking. You’re thinking that Cinnamon Sugar Cookies = Snickerdoodles. Well, kind of. I actually set out to make Snickerdoodles but ended up with Cinnamon Sugar Cookies instead. I had all of my ingredients out and ready to go, but when it came time to add the cinnamon and sugar, I accidentally added it to the mixture instead of setting it aside to roll the dough in before baking.

I stared at my mixer for a few minutes trying to decide if I should try to scrape out the cinnamon and salvage the Snickerdoodles, or just go with it and see how it turned out.  I was afraid that adding that much cinnamon to the mix would make the cookies have a dry, overpowering cinnamon flavor.

I am so glad I decided to just go with it and make them as is. I’ve shared before how my husband is not a big “sweets” person, and he LOVED these cinnamon cookies. I even caught him sneaking them before I was able to photograph them.

I packaged up a small sandwich bag for him to take to work and put the rest in a storage size bag… the next morning he took the big bag and left the smaller one haha! These Crisco sugar cookies have the cinnamon nostalgia of a Snickerdoodle, but the soft vanilla flavor of a sugar cookie.

These are accidentally dairy-free sugar cookies, which makes them great for gifting during the holiday season if you know anyone with allergies.

Here’s what you’ll need to make these cinnamon cookies:

Can I Use Butter in Place of Shortening?

Yes, you could substitute equal amounts of butter for shortening, but the cinnamon sugar cookies may not be as light and fluffy.

Butter contains some water and has a lower melting point than shortening, so the cookies may spread faster and end up flatter and crispier. Also be sure to use unsalted butter, or omit the salt from the recipe. 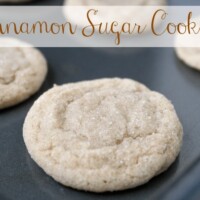 I like to slightly underbake my cookies and then let them continue heating on the pan, so I take them out at 8mins and then leave them on the cookie sheet for 2mins before removing them to cool.

Calories: 123kcal | Carbohydrates: 15g | Protein: 1g | Fat: 6g | Saturated Fat: 1g | Cholesterol: 13mg | Sodium: 38mg | Potassium: 43mg | Sugar: 8g | Vitamin A: 20IU | Calcium: 17mg | Iron: 0.5mg
Did you make this recipe? Mention @GraceGoodEats or tag #graceandgoodeats!
39shares
If you try one of my recipes, please don’t forget to rate the recipe and let me know how it works out for you in the comments.  I love hearing from you!  Be sure to follow me on FACEBOOK, TWITTER, INSTAGRAM, and PINTEREST + subscribe to my newsletter.