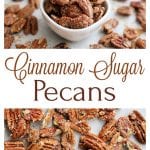 These Cinnamon Sugar Pecans are the perfect treat to snack on during the holidays.  They’re also great as added crunch for a salad or for last-minute gifting!

This post is sponsored by the makers of In The Raw®.  I received product, information, and a gift card to facilitate my honest review.  All thoughts and opinions are my own.

James isn’t a big dessert or sweets guy, but he does have one weakness: Cinnamon Sugar Pecans. If the fair or the ball game … or the gas station… is selling them, he’s buying.

I finally set out to make my own; this super easy and totally addicting recipe was the result.  I knew I didn’t want to mess with the hassle of egg whites (which most recipes call for) and I wanted to use turbinado sugar (I love the big, beautiful crystals). I love the way they turned out!

These Cinnamon Sugar Pecans are the perfect combination of sweet, nutty, and subtle heat.  James isn’t a big fan of cayenne pepper (he can tell right away when I’ve been heavy-handed in my White Chicken Chili Soup) but I still snuck a tiny 1/4 teaspoon into this recipe.

Cinnamon and cayenne are a delicious duo typically paired with chocolate (like in my Mexican Hot Fudge Sauce).  I plan to make another big batch of these Cinnamon Sugar Pecans to snack on in the kitchen while prepping for Thanksgiving next week.  Somebody remind me to save enough to sprinkle over Greek yogurt the next day for some Black Friday fuel!

These candied pecans contain no egg, which I find much easier! Here’s what you’ll need to make sugar coated pecans:

What is Sugar In The Raw?

Sugar In The Raw® is a Turbinado sugar made exclusively from sugarcane.  Juice is extracted from the sugarcane and then crystallized through evaporation to maintain its natural molasses, golden color and distinctive flavor.

Turbinado sugar also has less moisture than brown sugar which makes the crystals less sticky.  You can measure Sugar In The Raw simply by scooping it up in a measuring cup and leveling it off; whereas brown sugar has to be packed down first.

The jewel-like crystals are perfect as a finishing sugar to add sparkle to muffins and cookies.  The hearty, golden crystals are made from the first pressing of the cane and never bleached, so they keep the delicious, rich flavor and color of their natural molasses.

How to Make Sugared Pecans

How Long Do Cinnamon Pecans Last?

If stored in an airtight container in the fridge, these cinnamon sugar roasted pecans will last for a few weeks.

I love the combination of cinnamon, sugar, and cayenne — if you’re not a fan, feel free to omit the cayenne.

Be sure to use raw pecan halves. You’ll be roasting the pecans in the oven, so you don’t want to buy pre-roasted nuts.

These sugared pecans would be super cute wrapped up as gifts for Christmas.  Take my advice and package them up right away if you plan to gift them… before you eat the whole pan one handful at a time. Not that I know anything about that! 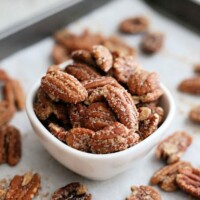 Store in the refrigerator in an airtight bag.

Sugar In The Raw® premium turbinado sugar is certified non-GMO, vegan and naturally gluten-free.  It’s conveniently available in packets, bulk, liquid and old-fashioned cubes.  Visit them on Facebook or at InTheRaw.com for more recipes.

So easy and so good. Made these for a salad. Had plenty left over for snacking.

These look so easy and yummy!! I never knew the difference between Turbinado and brown - thanks!!

I have a huge Costco size bag of sugar in the raw in my house right now! And I just bought pecans. I will definitely be making this