Not sure what to do with that leftover cornbread? Make this Cornbread Pudding! It’s drenched in the most amazing homemade caramel topping and crunchy pecans.

Sometime last year I went to a BBQ restaurant in Dallas that served cornbread pudding for dessert. It was one of those things that I didn’t know I was missing in my life until I experienced it for the first time.  I like my cornbread a little sweet, but turning it into bread pudding was something I had never considered!  It was perfection, and such an awesome pairing to delicious, smokey BBQ.

This cornbread pudding is everything you want it to be. Soft, fluffy, sweet. The caramel topping is the same one I use for my Caramelized Pecan Brie, just in a smaller batch.  It’s a perfect recipe for your next BBQ cookout or for when you have leftover cornbread.

How to Make Cornbread Pudding

Can I Prep This Cornbread Pudding Dessert in Advance?

This leftover cornbread dessert is best enjoyed the day it’s made. However, you can bake the cornbread a day or more in advance. (It’s okay if it’s stale, the sauce takes care of that!). 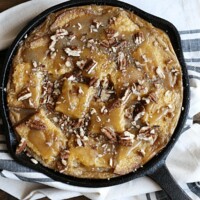 Wow! This sounds super decadent. I am a fan of cornbread but have never had it like this. It looks like an amazing breakfast or treat!

This was fabulous! Got some ideas to tweak it just a bit. Double the caramel and poke holes in the cornbread cake with the handle end of wooden spoon, then pour the caramel over the pecan crumb topping and let the caramel go down into the cake.in the holes. Made the cake in an 8x8 pan, it was totally full. Also put pecans in the batter of cornbread. Thank you for this wonderful recipe!!

I litterly just made this, from box mix through caramel topping. Looks fabulous but I think next time I'm gonna put pecans in the cornbread mix as well as on top. Also, put pecans on top first, then cover with caramel. Have never made caramel before, you made this so easy. Thank you for this unique recipe.

Hi - my husband's family loves both cornbread and bread pudding, so I'd really love to try this recipe. What size skillet did you use?

Fabulous recipe, Emily. It turned stale, 5 day old cornbread into a sublime pudding! The caramel topping is super easy. I had never made caramel before; thanks so much for teaching me how! The caramel is a perfect addition to the cornbread. Notes: I cubed the cornbread into ~1 inch chunks. I added the pecans to the caramel so they cooked a bit. They expanded quite a bit with the absorption of the liquid mixture. Thanks so much for this superb, but easy recipe!

I'm so glad you enjoyed it, Abbey!