This Beef and Vegetable Soup is one of my favorite winter recipes. After smelling it on the stove for a few hours, you’ll be ready for a big bowl!

I love a bowl of this beef and vegetable soup on a cold day.  It’s not the fastest soup to make, but I honestly think that adds to the goodness.  The anticipation of smelling it on the stove for a few hours will really make you hungry for a big bowl of it!  My mom makes this soup all the time and it’s one of my winter favorites.

Now, I know what you’re thinking — “but Emily, I thought you self admittedly hate vegetables?” — I do!  And you want to know a little secret?  I don’t eat the vegetables in vegetable soup, haha!  I add them in because, well, it wouldn’t be vegetable soup without them, but also for my family and the flavor.

Every now and then a piece of corn will sneak past me, hiding in a shell noodle, but 99% of the time I can get around them.  Really, it’s an art.  I also like to load my soup up with more noodles, meat, and potatoes… but you can always add more veggies if that’s your thing.

That’s the beauty of vegetable soup; you can play with it to find the version you prefer — broth ratio, amount of heat, less vegetables, etc.  This soup is even better the next day, after the flavors have had time to marinate in the fridge!

This easy vegetable beef soup recipe comes together with minimal ingredients, but the results are fantastic! Here’s what goes into this hearty vegetable soup:

How to Beef and Vegetable Soup

Making vegetable soup with meat takes some time, but it’s a really easy process. Here are the basic steps:

Can I Freeze Vegetable Soup?

Yes, just make sure to freeze the soup without the noodles in it as they tend to get soggy once frozen and reheated.

Do I Have to Boil the Potatoes Separately?

Technically, no. But I prefer boiling the potatoes separately to prevent them from becoming too mushy in the soup. 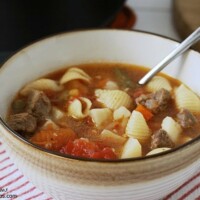 Making this soup for the second time! The first time I threw it all together and put in large gallon freezer bags as a crock pot meal to have on hand as an easy dinner after giving birth to our daughter! Super easy to throw in and heat up! My husband and I loved it.

I’m a fan of this stew! It’s just flavorful enough to serve to parents and picky littles! I used bouillon like notes because I didn’t have any packets on hand and it was just great for this freezing weather!

So glad you enjoyed it, Bailey!

any one make this in the crockpot?

I absolutely LOVE my Rockcroks in both sizes but have to say the Dutch Oven is my favorite. I have created a few other awesome recipes for it...risotto in 30 minutes? YUM!

I look forward to giving this a go! Thank you!