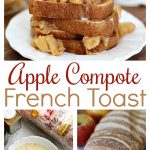 This Apple Compote French Toast brings the flavors of fall to a classic breakfast treat. Delicious all on its own but you can’t go wrong with a drizzle of real maple syrup!

This is a sponsored post written by me on behalf of Sara Lee® Artesano™ Golden Wheat Bread.

If you follow me on Instagram, you may have seen when I declared it officially fall in Texas a few weeks ago.  I made a roast with potatoes and carrots, bought two gorgeous mums for my front porch, and dropped some Thieves in my diffuser. I physically willed the cooler weather to come.

With those cooler temps and falling leaves also came the “end of summer sickness” aka transition to fall allergies. Sophia, Ian, and I all seem to have similar triggers (I’m looking at you, ragweed) and we’ve been miserable for about a week now.

And definitely bring on this Apple French Toast.  Y’all.  So good.  Elevate a breakfast classic to a decadent fall treat by topping it with warm apple compote.  This would also be phenomenal if you sprinkled a few chopped pecans or walnuts over it as well.

I used Sara Lee® Artesano™ Golden Wheat Bread in this recipe and it turned out beautifully!  The bread crisps perfectly on the outside but also stays soft and fluffy — a must for perfect French toast.

Made with olive oil, sea salt and a touch of honey, I love that it doesn’t contain any added colors or flavors, or any high fructose corn syrup.  The thick, flour-dusted slices hold strong under the weight of the apple compote. I can’t wait to try the Sara Lee® Artesano™ Golden Wheat Bread for my next grilled cheese creation.

For the french toast itself, you’ll need the following:

And to make the apple compote recipe, you’ll need:

How to Make Apple French Toast

Can I Prep the Apple Compote in Advance?

Yes! The apple compote will last up to 2 weeks in the fridge. I recommend reheating it in a saucepan before serving the apple cinnamon french toast.

This apple cinnamon french toast is delicious enough on its own, but you can’t go wrong with a little drizzle of real maple syrup.

If you want a no sugar added option, make a batch of my Sautéed Cinnamon Apples (Paleo, Whole30 compliant, and vegan).

I like to make my French toast on a griddle, rather than in a pan, and you can find the one I use here.  (It’s the same griddle I use to make my Best Ever Homemade Pancakes.) 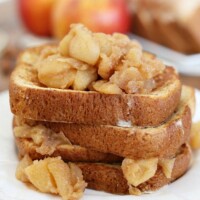