I remember holding Sophia in my arms for the first time like it was yesterday.  Nine pounds two ounces of brand new baby.  I also remember the feeling of staring into her big brown eyes and knowing that our family wasn’t complete.  James has always wanted three kids, and even though it took me a little while to get onboard with having another after Isabella, I quickly came around.  We knew we wanted to have them closer together in age this time, we didn’t know how difficult that would prove to be. 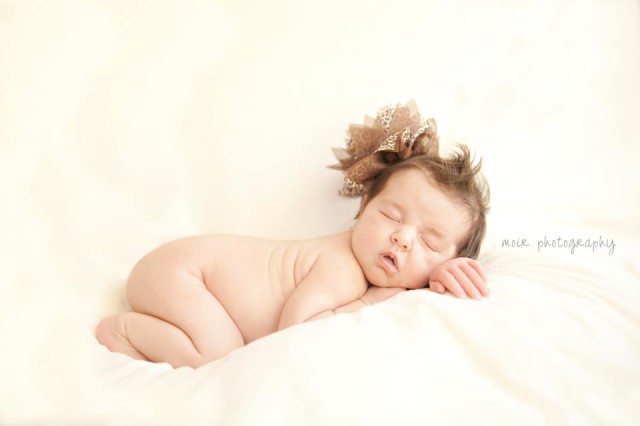 Out of the last 12 months of trying, the first month it didn’t happen was probably the most upsetting.  I know how irrational that sounds, but I really expected it to happen right away like it did in the past.  The following months were disappointing, but I figured we just weren’t getting our timing down right.  I would see sweet little brand new babies on Instagram and get excited at the idea of our new little one coming soon.

The nine month mark of trying was the second hardest- the whole idea that if we had gotten pregnant right away when we first started trying then that baby would be here.  But for the most part, we were still feeling okay.  Not too alarmed it hadn’t happened yet, not feeling pressure or desperate for it to happen, but starting to wonder if something else was going on.  Because I suffered from postpartum thyroiditis after having both of my kiddos, I decided to make an appointment with my endocrinologist to check my levels and see if I needed to get back on thyroid medication.  It was also time for my annual appt with my OBGYN.

My endocrinologist ran my thyroid panel, and my levels came back borderline- as they had been all year.  I mentioned to him that we were trying to conceive, and he suggested we go ahead and put me back on synthroid.  It wouldn’t hurt, and if anything it would improve my energy levels, etc from hypothyroid symptoms.  Everything with the OBGYN came back fine, and I mentioned to him at the appointment that we were trying for another and that my cycles had been irregular since getting off birth control pills.  He decided to run some lab work to ensure that I was ovulating.  I had to do two rounds- at different points in my cycle- but everything came back normal.  He suggested we give the synthroid some time to see if that helped regulate things.

By December, things weren’t improving and we still weren’t pregnant.  I checked back in with my endocrinologist to see if my levels had improved, or if we needed to up my medication level.  Lab work came back good, my levels had improved, and my thyroid was looking good.  My endocrinologist decided to run more extensive labs to check my hormones, with the understanding that if my issues weren’t hormonal they were mechanical, and I would need to return to my OBGYN.  Lab results came back normal, back to the OBGYN.  I was honestly really shocked that it wasn’t my thyroid and only a quick adjustment in my synthroid to get us back on track.

By now I’m starting to get a lot more frustrated.  People who announced their pregnancies when we first started trying are now having their babies.  My Instagram and Facebook are full of adorable new babies… but I no longer get the warm and fuzzies when I see them.  Feels more like the warm and angries… lol.  I’m truly happy for them all, but the sting is definitely setting in.  I want it to be my turn, and am feeling even more frustrated at my body for not knowing what to do when it’s done this twice before.

My OBGYN decided to send me for a pelvic ultrasound to rule out any fibroids, cysts, abnormalities, etc.  At the same time, he ordered a semen analysis for James to rule out any issues on his side.  This is the first time he was brought into the testing.  Up until that point it had been me going to appointments alone, leaving with “good news” each time, but without any explanation of why we weren’t pregnant.  We were closing out the required “12 months” of trying before we were supposed to start worrying.

The nurse called with our results a few days later.  My ultrasound was normal, James analysis was not.  His counts were all good, except for motility.  Motility was low, but even lower was progressive motility- the ability to swim forward.  We were completely shocked.  Honestly, I thought it was dumb to be sending him and we never even questioned it being a possibility.  My OBGYN suggested we repeat the test in three weeks.  From there it would determine if we continued with him, or if we moved on to working with fertility specialists.  The second test results came back exactly like the first and we made an appointment with the fertility docs.

Read the next part of our story soon.  I don’t know how regularly I will share about this, some days I want to talk about it and some days I don’t.  Today was a long day and I felt like writing it all out.  I’m also slightly hoping that maybe if I finally tell everyone we will get pregnant- HA.  Though I was just sure after we got a new puppy I would wind up pregnant, and clearly that didn’t work.  🙂  Most of all, I feel like it’s helped me to read other blogs with people going through this, so maybe my story will give someone else hope or comfort as well.

I also feel like no one really talks about the money aspect of all of this, so I wanted to share what we’re experiencing on that front.

We too struggled with secondary infertility. It is so misunderstood. Doctors dismissed it because we already had two children, while friends and family would say, "be grateful that you have two ". I was /am grateful for my children. But..I longed for more children. I'm happy to say that after two miscarriages and another year of trying, we had our third. Now, 9 years later, we just had our seventh and last baby. Why we went through four miscarriages and years of infertility, I will never know. But know that there is hope, empathy and understanding. I wish for all those who truly long to be parents the first time or second time around to be blessed with God's greatest gift of a child. Best wishes!

Thank you for sharing this!! I, too, know all about motility, and morphology. No swimmers here either, and they have soft heads. And that was WITH IVF. My heart goes out to you, know that you're not alone. Infertility sucks - there's no other way to say it. It doesn't get easier over time. No one you know, unless they've gone through it themselves, will get it. Know that, even though it feels like you're out on a raft, there are other people out there who get it. And who are thinking of you!!

We are nearly 3 years into the journey ourselves with secondary infertility. It's no fun at all and I am sorry you are going through it. I've seen people now in my journey have their 2nd child in this time frame. Babies seem to be popping out right and left around me. Some days are easier than others and some days I just wanna crawl in a hole. The doctors can't find anything wrong with myself or my husband. Just a healthy couple with the inability to conceive...frustrating as crap! At this point in our journey--I'm leaning towards forgetting it's a possibility and losing any hint of hope. My guess is it's my way of protecting my heart...

Ugh, so sorry to hear that. It is definitely frustrating. Especially when I'm in the best shape I've been in in YEARS and eating more organic/grass fed etc... it's frustrating when you feel like you're "doing everything right". Are you guys still looking into information about adoption? I have a friend that lives in Houston (she also has a blog) that is actively TTC and also pursuing foster to adopt at the same time.

I have been there too. My first three babies came like clockwork, but the the fourth (who we desperately wanted) didn't follow suit. I remember feeling foolish for even talking about it because I already had three children, but it didn't take away the hole that was missing in our family. After two years, we "gave up" and looked into adoption. That's when we got pregnant with our fourth. :)

I always wanted mine to be close in age and I sometimes still want that, but having this last baby be so much younger than his brothers has been a delight. They have enjoyed him so much and we have enjoyed him even more because we are more relaxed and not so busy raising other little people. The timing was perfect...eventually.

Hugs to you. I know the pain is complex and real.

Thanks Jessica. So true, sometimes I almost feel "guilty" for being upset because we've been so blessed with two beautiful, healthy babies, but it doesn't cancel out like that. Trusting that His timing is perfect, and subscribing to the whole "tell God your plans and he laughs" theory :) lol

Well that just sucks! I'm so sorry you are dealing with this and hope y'all are able to get pregnant soon! The world needs more of your adorable babies and it isn't fair you have to worry about all of this! Hugs and prayers, girl.