Today is our one year wedding anniversary!  I can’t believe how much has happened in a year… James got hired with the fire department, I finished my bachelor’s degree, I got a promotion at work, BellaRoo started Kindergarten, we had a baby…!

He has shown me what it feels like to put someone else’s happiness before your own… what it feels like to be a part of a true partnership.  We go through life trying to force relationships to work, and I think it takes finding “the one” to make you realize that this simply shouldn’t be so hard.  I’m so thankful to have found him and I’m so proud to call him my husband.

A couple of weeks ago Mackenzie at Friday Night Date Night asked me to guest post on her super cute blog.  I wrote about how James and I met, and since I’ve already posted all of my wedding re-caps, I thought I would share that story here on my blog today instead:

James and I met in a college astronomy class.  The fact that we both ended up in that class was completely  fate because he didn’t need it for his degree and just decided to take it as an elective, and I had just decided to switch from BioChem II a few weeks before the class started.  A few days before the semester started I came down with Swine Flu.  Let me just tell you that was as awful as it sounds.  I-felt-horrible.  By the first day of class I had been on meds long enough to not be contagious anymore, but not long enough to not look like death anymore.  I barely got up the energy to shower, threw on a sweatshirt, put my hair in a ponytail, and headed off to class.

This class was a lecture/lab combo and that night we had both.  I was just expecting to go over the syllabus and return as quickly as possible back to my bed, but my professor of course had other plans.  When he asked us all to get out our “star wheels” (which of course I didn’t have with me) I started to panic.  I immediately began to scan the room, knowing I need to make friends fast to find someone to share with me.  Of course I picked the cutest boy in class, who just happened to be sitting on my row.  When we got outside I introduced myself, which went something like this:

Me: Hi, I’m Emily.  Is it cool if I share your star wheel?  I forgot mine.  Oh and by the way, I promise I’m not dying or contagious… even though I look and sound like it… but I’m on meds and my doctor says I’m fine.
James: Uhh, sure.

Yep.  I was smooth, and clearly he was into me.  So after spending an hour outside in the freezing cold of January (coughing like crazy), class was over and I thanked him for taking pity on the sick girl.  We didn’t have class again until the following week but this time he came and sat next to me.  I couldn’t tell if he was shy or “just not that into me”… but I felt like he needed an encouraging nudge to ask me out (ha-ha).  So the following night I told him how I hated that class was so late (7-10pm) because I didn’t have enough time coming from work to grab anything to eat and by the time we got out of class I was starving.  Which of course opened the door for him to ask me to go grab a bite to eat after class… which he did.  Now if you ask him, he will tell you that he had been planning that all week and that it was totally his idea.

So after class we went to Steak and Shake because that was one of the few places nearby still open.  I actually hate Steak and Shake ha-ha.  We ended up talking the entire night until they finally kicked us out at 2am.  From there we were inseparable in class.  (Did I mention he had the highest grade in the class?  Did I pick wisely that first night or what ha-ha!)  I found out that he had the last season of ‘Lost’ on his iPod and soon we began going over to each other’s house after class to watch it.  About 6 weeks later we took a trip to Houston together and when we got back he said “I love you” for the first time.  I had already known for weeks that he was the one.

So when people ask us how we met, we love to say that we met ‘gazing at the stars’… sounds more romantic when you leave out the part where I was coughing up a lung with the flu.  🙂  James proposed to me under the stars a year and a half after we met and we were married the following Fall.  If you would like to see pics from our wedding (and see how our ties to astronomy made an appearance) you can view them here or here. 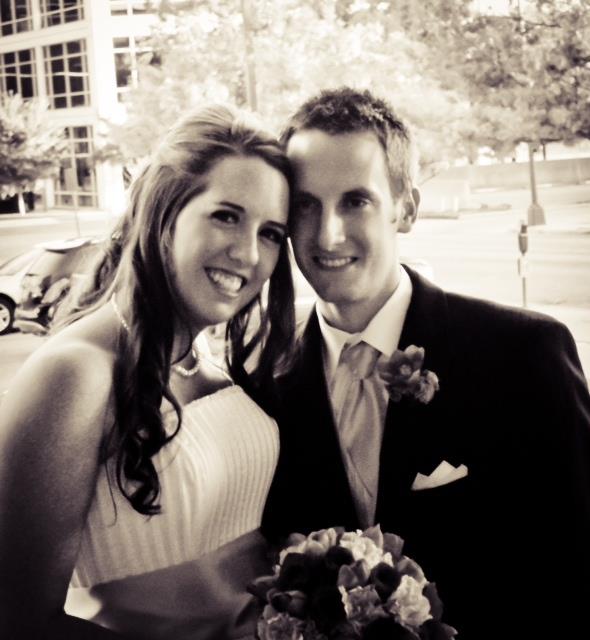 Happy Anniversary! What an adorable story and great blog! :)