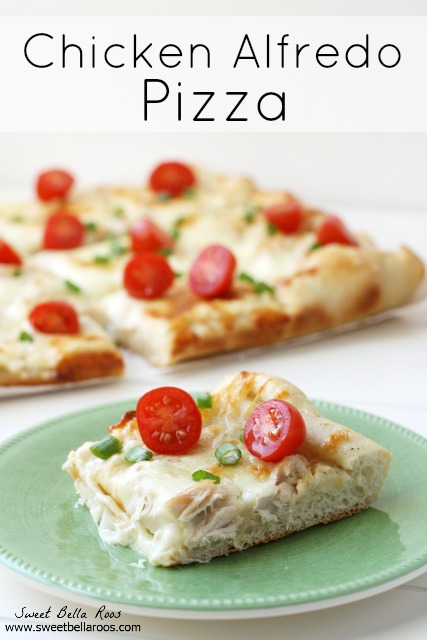 Pizza is one of my main food groups.  My food pyramid consists mainly of pizza, pasta, and chocolate cupcakes- and not necessarily in that order.  So it was only a matter of time before I combined two of my greatest loves: chicken alfredo and pizza.  Isn’t she a beaut?  Crispy, golden brown, creamy, melty goodness right there friends.

We order pizza way too often, especially when I have a really simple pizza dough recipe to make it myself; but sometimes I just don’t want to wait hours for it to rise, dang it!  If we are ordering out for pizza it’s usually because I am running low on groceries and avoiding a trip to the store, or we had a late night of sports practice, or I forgot to put dinner in the crock pot (whoops)… and when that’s the case, I don’t have time to make my own dough either.

We made this chicken alfredo pizza a few nights ago for those very reasons.  I hadn’t meal planned for the week and BellaRoo had late practice, which meant I was low on time to get her fed and in bed.  I picked up a package of refrigerated Pillsbury pizza crust the other day because I had never tried it before.  I love their crescent rolls for my Breakfast Cheesecake and crescent rounds for Pumpkin Cheesecake Rolls, so I wanted to give the pizza crust a try.

I threw this chicken alfredo pizza together in about 5 minutes (no waiting for dough to rise!) and had it on the table by the time James and Bella made it home from practice.  We ate every single piece of this pizza- definitely a winner and new addition to our dinner rotation.  I love having an arsenal of go-to recipes that I can whip up when we have a busy night- which during the school year feels like most weeknights!  This pizza dough will be added to my list of staples to keep on hand because it’s so versatile and can literally be topped with anything.  I used jarred alfredo sauce and rotisserie chicken to make this meal even easier. 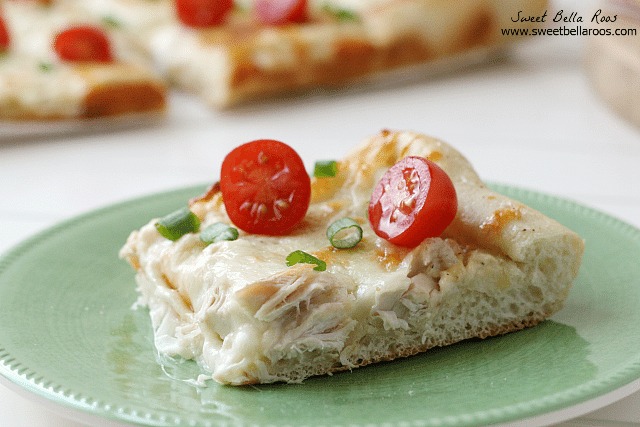 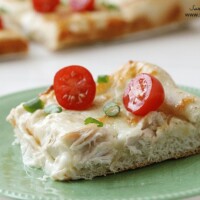 We like to sprinkle with red pepper flakes for some added heat. I also like to run butter around the edge of the crust and sprinkle with sea salt.

I've been craving chicken Alfredo and this pizza looks perfect!

YUM! This sounds delicious and super easy!! Pinning to my Dinner Ideas board!